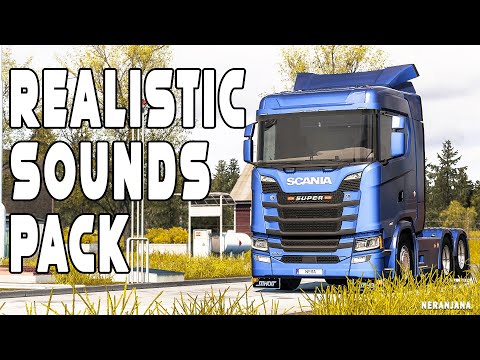 The mod features dynamic and realistic sounds, covering the following:

For further realism, the mod may also add official colors to each AI traffic vehicle it modifies for sound, with rarer colors less likely to be seen.

The SCS Forum link below for the Sound Fixes Pack holds all official download links and is open to suggestions and questions about the mod: You are allowed to modify or improve my file under any circumstances but ONLY for personal use.

You are allowed to convert this file under any circumstances but ONLY for personal use.

Changed a few sound effects and added one for the default air brake sound replacements, now totalling at 18 variations.

New air brake sound effects have been added to the array for AI traffic trucks.

Some air brake sound effects introduced in v23.04 have now been added to the array for AI traffic trucks.

- Fixed the issue where the music would stop after customizing your truck for a long time.

- Added an extended version of the former truck upgrade music from pre-2014 ETS2.

- Improved speaker effect for the last 'exit' word in the roundabout phrase.

Default grinding sound when engine speed and road speed are only slightly misaligned should now be less apparent.

- This feature is exclusive to users with manual gear shifters only (not applicable to keyboard and mouse).

- Damaged gearbox sounds are now an interior sound to allow for a clearer sound in the cabin, with the tradeoff of no exterior sound.

1 new additional variation of the default air cutoff sound for when the air compressor is unloaded by the governor.

Slight increase in sound volume of some of the default air brake sound replacement sound effects.

- Realistic distance attenuation - now you can hear it subtly further in the distance when someone is mowing the lawn.

- Its sound mix also includes its own air brake sounds!

- This option can be found in the "Voice and language" dropdown in the game's Audio Settings.

- The sounds make use of a new mix of realistic tire noise at highway speeds!

Slight increase in sound volume for air brake sound when the service brake is lightly tapped.

- New chime for the audible warning when going over the speed limit if using the Sound option.

- Balanced sound volume of the phrase for when going over the speed limit if using the Voice option.

- Marginal enhancements to the speaker effect so it sounds even more like it's being emitted inside the truck.

Several quality of life improvements to the Sound Fixes Pack variants of the English Doug/Skye UK and US voice navigation options:

- New chime for the audible warning when going over the speed limit if using the Sound option.

- Balanced sound volume of the phrase for when going over the speed limit if using the Voice option.

- Marginal enhancements to the speaker effect so it sounds even more like it's being emitted inside the truck.

Winter sounds mod has been updated to version 3 - great for use with Frosty winter and the Sound Fixes Pack.

7 additional default variations of air cutoff sounds for when the air compressor is unloaded by the governor.

It adds to the 3 air cutoff sounds already existing in the base game.

- Bird sound position moved away from the truck to prevent hearing it too often with windows closed.

- Chirp frequency peaks at 4 AM in the morning.

The 1.46 city ambient sound event of vehicles passing would feel strange when no traffic is around:

- So this has now been modified to a much more distant traffic sound.

- The former sound effects might get merged into the Sound Fixes Pack AI traffic sounds in 2023. We'll see!

Reduced "blanketing" of some 1.46 background ambient insect sounds so that they can be further from the player's truck. [ATS edition]

Tire sound effect added for one of the tractors in AI traffic.

Revised sounds of the Cessna 172.

Slight increase in sound volume for the horn sound effects of the 2020 Mercedes-Benz GLS (X167) in AI traffic.

Adjusted 3D sound position for the sounds of flags in the wind.

Applied sound of flag in wind to some flags without sound.

Reefer trailer sound addons for ETS2 and ATS have been updated for 1.46!

Removed V6 and I4 engine sounds from the 2015 Ford Mustang in AI traffic due to the present 5.0L emblem. The V8 sound remains.

Reduced "blanketing" of some 1.46 ambient insect sounds so they cover a smaller distance radius. [ATS edition]

Compatibility updates for the next version of the Winter sounds mod.

Compatibility updates for the next version of the Winter sounds mod. [ATS edition]

When you hear this, it is recommended to go into the interior camera for the complete sequence, unless you want to skip it.

Fuel station refuel ending sound sequence enhanced with sound of getting into the cabin and new door close sound effects.

Slightly increased sound volume for some of the engine sounds for the 2020 Subaru Outback in AI traffic. [ATS edition]

Nullified default AI traffic vehicle random start from stop sound for now due to it being unspecific for any vehicle.

Engine sounds added to the field tractor plowing fields - now it's possible to hear its engine while plowing. [ATS edition]

Reduced some reverb on the default reverse beeper sound effect.